Wireless Sensors are nothing but hardware devices capable of measuring different physical quantities and pushing all the data collected to an internet-based central location. The sensors can be configured for different objectives like collecting real-time data of temperature and humidity in a room or a closed container, or to measure the value of current flowing in a device. These devices can be configured to run for longer durations on low power sources like AA batteries or coin cells as well.

A wide range of wireless sensors is available in the market today. Some of the common ones are:

How does wireless sensor work?

Wireless sensors follow certain wireless protocol depending on the application requirements. Some of the available standards include 2.4 GHz radios which are based on either IEEE 802.15.4 or IEEE 802.11/Wi-Fi standards. As per the decided protocol, a wireless sensor is deployed in the field of measurement. This sensor then operates continuously, monitoring, recording the physical conditions, organizing and pushing the collected data at a central location. This central location is called Gateway. The data gathered is saved in numerical data form. Also, OGC (Open Geospatial Consortium) has specified standards for interoperability which eases the integration of sensors into the internet allowing the end user to control them through a web browser.

What is a Wireless Sensor Network?

A single sensor node can record only one predesignated type of data. A complex system delivers different types of data which has to be continuously monitored, organized and stored. One sensor node alone cannot handle all of them. For such systems, we need to have different spatially separated, but placed within the system, sensor nodes. These sensor nodes operate together and cooperatively pass their data through the network to the gateway. Modern sensor networks operate in a bidirectional manner, which means that we have a control over the sensor activity.

What is a Gateway?

A wireless sensor gateway is nothing but a medium between the sensor nodes and the end user, facilitating the gathering and exchange of data. A single gateway can handle a large number of different sensors.

What is there inside of a wireless sensor? 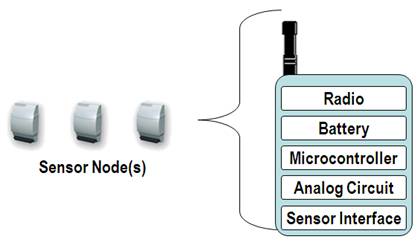 A wireless sensor consists of the following electronic components:

Sensor Interface: This is the most exterior (in some cases visible) part of the device. All the physical interactions are done by this component which generates a signal and sends it to the microcontroller.

Analog Circuit: This part of the device accepts the raw data from the sensor circuit and converts it into a digital form.

Microcontroller: This is the brain of this device. It receives the data from analog circuit and carries out the processes required.

Battery: The power supply of the device. There are different variants available in the market. Some of the most popular ones are AA based, coin cell-based and lithium-ion based.

Radio: It is responsible for the communication of this device with other sensor nodes or the gateway.

The main motive behind the development of wireless sensor network was to implement it in military specific applications and surveillance. Some of the applications are mentioned below.

Area Monitoring: The sensor nodes are deployed over a region which is to be monitored in order to prevent enemy intrusion.

Medical: These sensors can be implemented in either close proximity to the patient or inside the patient in order to monitor his/her health. For example wearable devices that can help in the monitoring of ill patients inside the hospital premises.

Environmental Analysis: Environmental analysis consists of constant monitoring of surroundings. For example, network mounted in a forest will inform about the temperature and humidity which will give a warning to the end user in case the temperature starts rising and reaches a danger limit which will convey that a fire may have started. Also, the humidity level will let the user know if it is raining. It may also be used to monitor the gas effect due to the vegetations and trees.

Water Quality and disaster monitoring: A network of sensors deployed in water bodies like rivers, lakes, seas etc can inform us if the water level starts rising and reaches a danger limit warning us of flood or cyclones. These can also help us in the creation of accurate mapping of water bodies.

Natural disasters: Wireless nodes can help us in minimizing the losses caused by natural disasters such as earthquakes, lightning, tsunami etc by warning us so that we can act effectively before getting hit.

Machinery: Wireless sensors can be installed in places where a wired sensor cannot reach. For example rotors and stators in an electric motor or generator which have constantly rotating parts.

Civil: Wireless sensor network can be used to monitor the condition of civil infrastructure and geophysical processes over a long period of time. 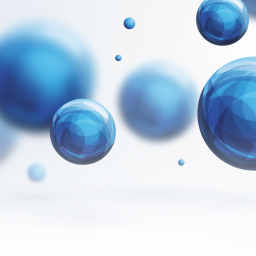 Introduction Wireless Gas sensors are devices that alert the user wirelessly when they detect harmful and undesired gases. Or when… 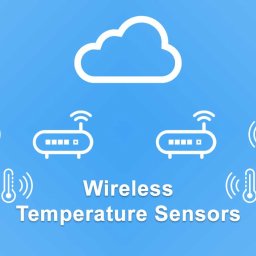 NodeSense is an easy to use affordable remote monitoring, sensing and control solution for businesses and individuals.